Last Friday Gayle took me out for an assessment around the waterfront – a nice opportunity for those taking a stroll to be amused by my running style.  Gayle had me running back and forth to see what was happening with my form.  I haven’t run in ages and I felt very heavv and clunky – particularly my right leg.  I could tell that I was heel striking, but if I tried to land on my mid / fore foot I just felt even more awkward.

Around at Freyberg wharf we started doing activation exercises – particularly of core muscles.  After doing a few of these I ran again and we felt and saw a marked improvement which was great, however my right leg in particular was still struggling not to heel strike.  So we did some jumping exercises (high knees) to further activate the core and then I tried running again – and voila!!  It was amazing how different I ran after just doing a few simple activation exercises first – I couldn’t believe the difference!  I think it was a relief for both of us!  I was actually running on my forefoot without consciously having to think about it – that was the beauty of it – it just started happening naturally.

We decided to run back to Mac’s brewery and then walk back to the office on Willis st from there for a cool down.  On the run back I could feel my form starting to slip, so we just stopped, did a few squats and got back to it.  It turns out my form is better when I run faster, rather than jog, so my training sessions will involve shorter faster runs interspersed with walking and core activation exercises. The calves are already starting to feel it after that session, which is a good sign I’m running better (better than the shins hurting!). It’s exciting to see the possibilities after just one session!

Monday found me at City Fitness in Thorndon having a biomechanical assessment with trainer Carl Hammington and I’m now looking forward to getting the overview and my progra m from him this coming Monday… stay tuned! 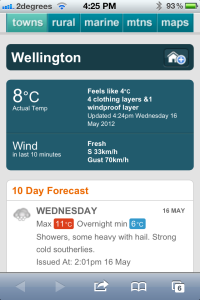 In the meantime I’ve been on 3 mini-runs up majoribanks and a little around Mt Vic (in some awful, normally deal-breaking weather I might add – see picture left).  My left calf was getting particularly sore, so I had an appointment with physio Grant on Thursday, now I’m about to go test out the work he did on my back and hip to relieve it.

For more posts in this series click the ‘Himalayan Dreaming’ category tab.