Skip to content
Posted on February 10, 2014 by Amy Posted in Personal Training, The Aspirational JoggerTagged 10k training plan, barefoot running, round the vines 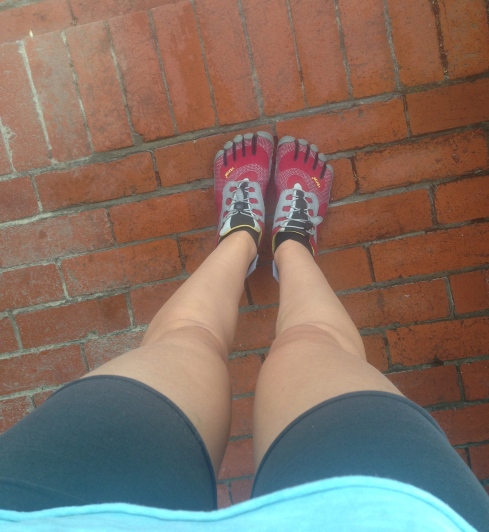 Round the Vines is just over a month away. I’m not a huge fan of running (or in my case let’s be honest and call in jogging) but I think that this year I’ll give the 10k a go. I figure that as Gayle will be in amongst the action at Tarawera that weekend, where people actually run 100k on hilly terrain, then I ought to be able to shuffle round a few vineyards. Especially as vineyards are flat. I think there may even be wine at the fuel stations, and it will get me out of being a warden again this year.

So on Saturday I decided to commence training. It wasn’t a very well thought through decision. I was feeling fairly average, it was raining, and everything seemed to be shaping up towards being a raining lego-y afternoon, with a side of tea and chocolate cake. I had the tea, chocolate cake, and built some lego. Then out of no-where I found myself telling the family that I was going for a run. Grant looked at me as if I was mad, pointed out it was raining, and that just moments earlier I had been complaining of feeling a bit rubbish. ‘Perhaps I need the endorphins’ I said. ‘I’ll try out my new toe socks, they will keep my feet warm’.

I drove up the road for a couple of minutes to Dry River road and parked up. Dry River is flat and straight. I like it because it reminds me of an old Roman Road, and I like the donkey that lives at DaisyBank farm half way down. I decided the donkey would be my target, I’d see if I could reach her (or perhaps it is a he-donkey) and then walk back to the car. So off I jogged. I actually felt fairly good. I’ve been doing weekly Fast-fit with Carl , and since the boys acquired a drum-kit I have been going for increasingly long bike rides on Sunday mornings. I made it to the donkey, she was, as usual, in a world of her own, just mooching about. 3k. I was a rock star. I will keep going, I thought to myself. On the way back to the car the long straight road was less appealing. It seemed endless. I became very aware of my useless running style. My right leg seemed wonky. I’ve heard Gayle talk running enough times to know that ‘heel striking’ is bad and I suspected I was the worst kind of heel striker. My ankles began to feel a bit sore, and my hips started to ache. I knew I should take it steady and walk back, but I suddenly seemed to have something to prove to myself, and stubbornly jogged on back to the car. 6k. I was wrecked. I walked in the door with each step threatening to put my legs into full cramp.

By the time I woke up on Sunday morning my legs were so sore that I literally had to hobble around. It was not very impressive. Tomorrow I will see Carl, and find out how you should start training for a 10k. I’ll let you know.