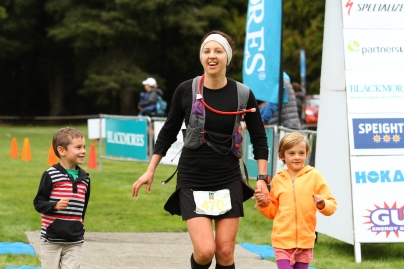 datory gear and hilly terrain arrived last week. I know the course- the iconic New Zealand 42nd Traverse. Primarily a mountain biking track, it’s a jeep track of rutted winding roads through hill country at the base of the volcanoes Tongariro and Ruapehu filled with river crossings and in May, mud. Lots and lots of slippery slimy clay mud. I decided that the terrain warranted a step away from my much loved FiveFingers to more heavy of tread trail shoes. This is the first time I have done so in more than 4 years, so I had the strange experience of having to transition back into albeit reasonably minimalist “normal” shoes. It’s amazing how what would otherwise be considered super light, to a fivefingers runner feels like a dead weight on the bottom of your foot. But it was a deadweight with meaty tread, so I persevered and did some long run training in the shoes to adapt.

I recall my first 15km run and coming back home with aching calf muscles. Now this was unexpected for me. As a physio the logical expectation would be that if you reduce the repeated use of an increased range of motion used in a muscle, one would expect less loading to the muscle and therefore less stiffness. This was not the case. My calf muscles were seriously confused by not being put through the full range of motion, and consequently I had to stretch them every time I was running in these shoes so that they didn’t stiffen up.

It broke my heart to run the awesome Wellington single track in the less sensitive shoes, and nearly stopped my heart the number of times I tweaked my ankle as the greater heel rise meant more rolling of the ankle. I have had many ankle sprains, one a particularly severe avulsion fracture (the ligament doesn’t tear but pulls some of the bone off instead) before I started running in the fivefingers which managed to put an end to this injury for me, and I was not keen to get an injury now.

But I persevered and I managed to get out onto the course and run in the mud and on the hills for 42.2km. When I finished I headed straight for the beer tent. Yes I drink beer, its an alternative to pain medication and in moderate amounts safer for you. I’m not endorsing it at all, just saying at the time it’s all I could think of. I was in a lot of pain. In fact more pain than I have experienced running in the past 4 years. In my knees especially. The next day I woke up to swollen joints and blisters. Blisters are normal for shod runners, but you don’t get them in the fivefingers because there isn’t any friction. I love my fivefingers, I hope the developers hear me- we need some with even fatter mud-eating tread so that I don’t ever have to experience blisters and painful swollen knees after a run again!!

So imagine my surprise when I see the big deal about the Vibram FiveFingers lawsuit in the US. It’s not news to me. Of course there is a lawsuit, it’s the US. Litigation is a normal get-rich-quick scheme and VFF are a strangely controversial product.

Vibram America made a claim in their retailing of the product that was not scientifically substantiated at the time. It’s not that it was wrong, it just wasn’t proven at the time. But they decided that they didn’t want to waste endless volumes on lawyers fees and chose to settle rather than to fight an ongoing lawsuit. They have better things to do (like make mud-eating soles) and important stuff like that.

FiveFingers opened the world of running to one very important fact, the single largest break through in running health around the world- they made us aware that how you run is important and that improving running form was an essential step to safer, more enjoyable running. While this isn’t news at the elite level, the awareness that it brought for the social runner is nothing short of awesome.

Fortunately the lawsuit doesn’t have anything to do with us here in New Zealand and Australia. The distributers for our part of the world, one of which has been a running coach embraced the product and understood what it could do. They understood that steady transitioning was important and learning how to move correctly was essential in order to use the tool appropriately. Consequently they included information regarding safe transitioning and put on natural running workshops so that if you wanted to run in the shoes, you could get some help getting started to do it safely.

I get really excited when I see people with functional feet. Toes that can spread and don’t curl up under them when they weight bear. Think of trying to do a handstand, but then squishing your baby finger under the rest of your hand with your fingers tightly pressed together and bent at the knuckles. It’s just not going to be as stable, is it?

As a physiotherapist using our anatomy in a functional away so that we are able to move well and move often and enjoy widening the boundries of our movement inspires me. It fills me with joy to embrace movement, embrace living with physical freedom and enjoy our environment. Fivefingers and the athletes and people that wear them to have fun in have inspired me in so many ways, it’s an exciting journey to be on!

One thought on “The T42 and The lawsuit”