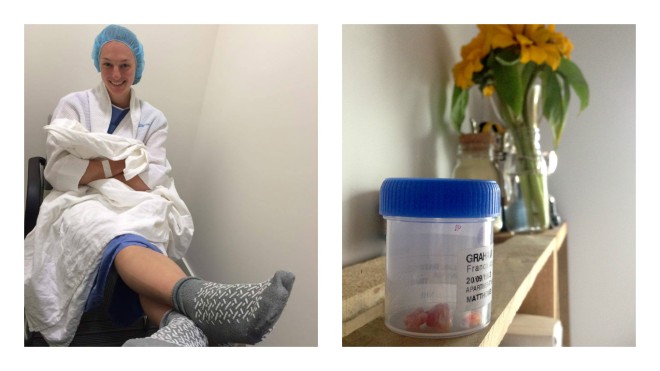 The problem with having a plan is that plan’s don’t always work out the way you want them to. I had a post-surgery plan and it did not follow suit. I was told I should be able to run again after 6 weeks and be back into training by 3 months. Me being me, I shortened these time frames and had high expectations. I wanted my recovery to go perfectly. I wanted to be weight bearing after 3 days, I wanted to be out of my moonboot after two weeks, I wanted to be doing rehab as soon as I was out of my moonboot so that I would be ready to compete in the Oceania Beach Handball Champs in February, only 3 months after my surgery.

The surgery all went well. Three bone fragments were removed, two of them actually quite large. The first two weeks post-surgery were pretty tough mentally. I learnt a lot about myself and it wasn’t particularly good things. Not being able to exercise was one of the things I really struggled with. I find exercising an amazing way to relieve stress and not having this as an option was difficult. My frustration went through the roof, and even though I knew it would get better, at the time it didn’t seem that way. I had trouble weight bearing 3 days afterwards as I was expecting to be able to do. It was very sore and I didn’t have enough flexibility in my ankle so couldn’t actually get it sitting flat on the ground. After a week of not being able to weight bear I was finally walking – Walking with crutches, but walking all the same!

‘Somehow’ (I don’t want to play the blame game but … my boyfriend may have put a compression bandage on too tightly) I managed to get a friction blister on the wound which meant the surgeon wanted to keep my ankle immobilized until the wound was completely dry. This meant moon boot life for me over Christmas! At this point in time I was unsure if I would make the time frame I had set out for myself. Just after Christmas I was a little bit naughty and self-diagnosed myself out of the moon boot. The wound was looking pretty good and I had had enough with being cautious. I needed to get out of that boot!

As soon as I was out of the boot things improved immensely, I could start rehab with Peter who managed to get me back on the court and ready for the Oceania Beach Handball Champs. He has also managed to put up with me for the last few months, which was probably a harder task. I was back at training 3 weeks prior to the Oceania Beach Handball Champs. It was pretty touch and go for a while there and I couldn’t jump into full training straight away. I had to hold myself back a little and be sure it would be strong enough to sustain a full training session. But I made it, after multiple break-downs thinking I wouldn’t be ready, I was finally ready. Well, as ready as I could be.